All You Need To Know About The Impressionists

Published by Arthur Waller on November 23, 2020

Having gotten its start with a group of artists who were based in Paris in the late 1800s, all art aficionados will be aware of the Impressionists and the significant contribution that they made to art as we know it today.

The work of the artists who are credited as belonging to the Impressionist Movement is characterised by small and thin brushstrokes, an open composition as well as a strong emphasis on the changing quality of light.

They preferred to paint outside as this enabled them to capture this quality of light more effectively. A beautiful example of the Impressionists’ love of painting outdoors this is Claude Monet Painting by the Edge of a Wood the Tate Gallery.

The Impressionists preferred to use real-life subjects. Pierre-Auguste Renoir’s Bal du moulin de la Galette – which adorns the walls of the Musée d’Orsay in Paris – is the quintessential example of this characteristic of the Impressionist body of work.

The Rebels Of The Art World

The Impressionists were radicals. They violated rules of academic painting and put together paintings from freely brushed colours which they used in favour of lines and colours. As we’ve said before, the Impressionists favoured real-life scenes while previously the norm among artists was to paint still-lifes, portraits as well as landscapes.

The Devil Is Not In The Detail

The Impressionists portrayed overall visual effects as opposed to concentrating on detail. The brushstrokes that they used were short and broken. In addition, they also used pure as well as mixed colour in order to achieve a burst of colour. Previously, colours were blended smoothly or shaded.

Monet is one of the original founding fathers of the Impressionist Movement. Light and atmosphere replaced figures in his paintings and he experimented bold colours as well as unusual compositions.

Monet was heavily influenced by John Constable and Joseph Mallord William Turner. Some of Monet’s the most prominent works of art include Water Lillies, Impression, the Rouen Cathedral series, The Haystacks and Woman In The Green Dress. 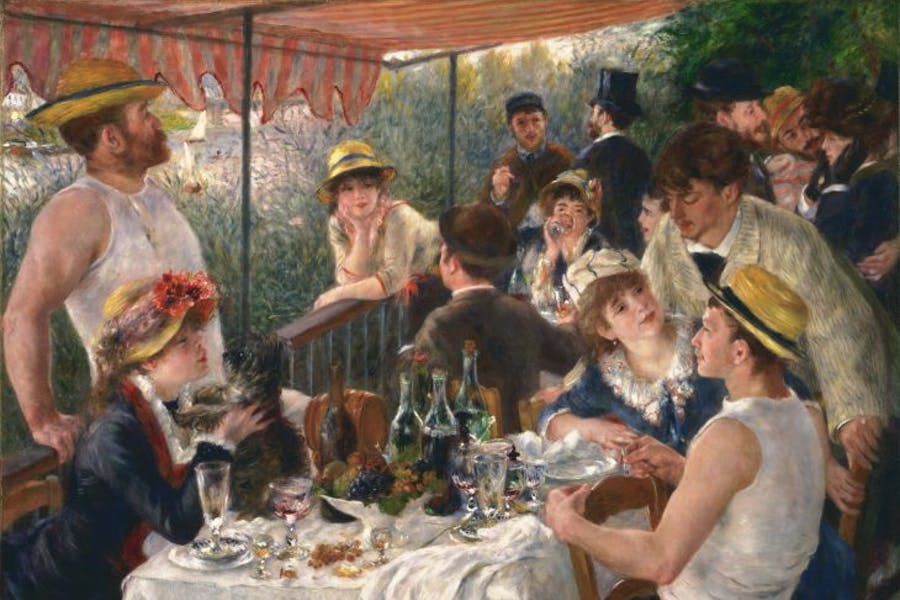 The focus of Renoir’s work was capturing the modernity and leisure of Parisian life. His calling card is his ability to capture the movement of light and shadow as is his uncanny ability to capture beauty. Renoir had a fascination with the human form and his exceptional skills as a colourist can be seen in the way in which he captured his female subjects’ skins.

Besides Bal du moulin de la Galette, some of Renoir’s other masterpieces include Woman in Black and Diana the Huntress.

While many impressionist painters favoured landscapes, Degas concentrated on society. Like Renoir, his subjects were human and he favoured painting women – something which his academic training sparked his interest in.

From dancers and singers to prostitutes Degas made it his life’s ambition to paint these people in new and inventive ways. A number of his most notable paintings include The Bellelli Family, Monsieur and Madame Édouard Manet as well as Foyer de la Dance.