Exploring The Garden Of Earthly Delights 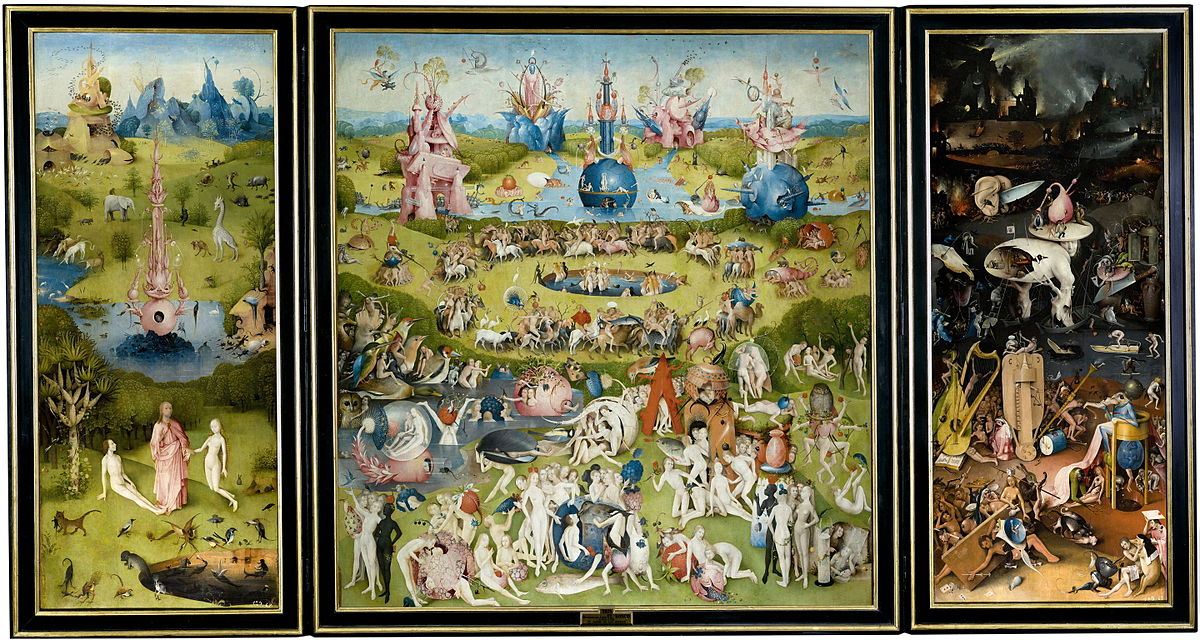 More than 500 years after Jheronimus van Aken, better known as Hieronymus Bosch, painted it, the Garden of Earthly Delights still intrigues and mystifies viewers. The Dutch painter is famous for his weird and wonderful allegorical works, but none are more fantastical than the triptych currently located in Madrid’s Museo del Prado.

The triptych takes viewers on the journey from original innocence, through the delights of the world, to damnation. However, the real appeal of the three paintings are found in the abundance of human, animal, and imaginary figures that populate them.

Like most triptychs, the Garden of Earthly Delights consists of a central panel with hinged smaller panels on either side. The left and right panels can be closed to cover the central one.

When closed, the outer panels do not give any clues to the strangeness of the inner panels. They are a muted greenish-grey grisaille that show God’s creation of the world. God is shown sitting in the darkness of the void, while the earth, still unpopulated, is enclosed in a sphere. Written across the top of the panels is a quote from Psalm 33 which says, “For he spake and it was done; he commanded, and it stood fast.” Opening the panels is like launching top pokies online in New Zealand – a whole world of excitement awaits.

The left inner panel is the most innocent of the three that form the Garden of Earthly Delights. In a landscape filled with realistic and imagined animals, God is shown introducing Adam to Eve shortly after creating her from one of his ribs.

One of God’s hands is raised to bless the union of the mythical first man and woman. However, on the right of the painting is the old biblical symbol of temptation, namely a serpent coiled around the trunk of a tree.

The central panel depicts the Garden of Earthly Delights that gives the Bosch’s triptych the name by which it is popularly known. The garden is a large meadow with lakes, ponds, and strange towering structures, in which people and animals cavort, play, feast on fruit, and engage in all manner of merrymaking and sensuality.

Men emerge from orbs, couples are encapsulated by flowers, groups of people ride on animals, splash in the ponds, eat giant fruit, ride on horses, deer, and other animals, and one man even uses another man’s bottom as a flower holder. The atmosphere is one of unadulterated hedonism.

The innocence of the left panel and the colourful pleasures of the central panel are completely absent from the right inner panel of the Garden of Earthly Delights. Instead, it offers us a glimpse of Bosch’s vision of hell.

Night has fallen and buildings burn in the background. Ponds have frozen, armed crowds march off to make war, and demons and grotesque animals feast on or torture people whose nakedness has become shameful. Like in the other panels, each scene within the greater setting reveals myriad surprises, but it is highly unlikely that we will ever understand them fully.